Michael and Rachel have been mission co-workers in Niger since 2014, serving at the invitation of the Evangelical Church in the Republic of Niger (EERN).

Michael Ludwig works with leaders of the Evangelical Church in the Republic of Niger (EERN) to use Community Health Evangelism (CHE) as a ministry that can help their nation, enhance relationships between Christians and Muslims and provide a welcomed way of sharing the good news of Christ.

CHE is a model that helps communities identify and respond to their greatest needs with their own resources. The CHE method is a very promising strategy for empowering pastors and evangelists, who then play a vital role in bringing about community transformation. CHE can be used with respect to literacy, education, health and general community development. CHE lessons include Bible stories that help people discuss a holistic definition of health and God’s desire for healthy relationships. Michael also trains future pastors and evangelists at two of the EERN’s Bible schools in subjects varying from CHE to English. Another part of Michael’s role is to help the EERN build their capacity for implementing a literacy and evangelism training program for their pastors. 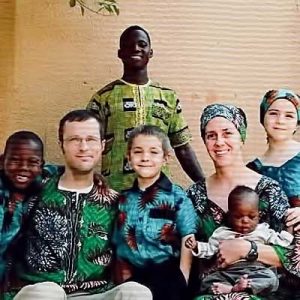 The other half of this ministry team, Rachel Ludwig, focuses on homeschooling the couple’s children and developing relationships in their neighborhood and church community.

Michael, a native of Holland, Michigan was an associate pastor at Overbrook Presbyterian Church in Columbus, Ohio for four years prior to entering mission services.

Rachel grew up in Gibsonia, Pennsylvania and has spent most of her professional life as a middle school math and science teacher. She taught in public school systems in Pittsburgh and Cincinnati.

Niger is often called the gateway between North Africa and Sub-Saharan Africa. It is one of the continent's most impoverished countries and is at the bottom of the United Nations' Human Development Index due to lack of literacy, time spent in formal education and the lack of community development of resources and infrastructure. Only 30 percent of the population is literate and less than 50 percent of the children are enrolled in school.

Less than one percent of Nigeriens are Christian, but while 95 percent of Nigeriens are Muslims, the government is secular, and there is openness to the gospel. Many people are willing to seek out pastors and evangelist to gather practical knowledge, like information on health and well being or instructions in reading and writing. These church leaders are often the only educated residents in their communities.